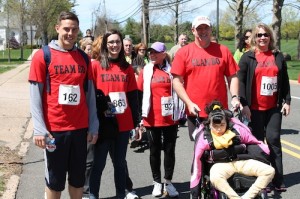 Mike and Bo Geraghty, second from right, with other members of “Team Bo” at the 2013 Miles for Matheny, an annual fundraiser and community event.

Mike and Liz Geraghty of Cranford, NJ, are the parents of Bozena Geraghty, a resident at Matheny. Bo was born with Cornelia de Lange syndrome, a genetic disorder that causes a range of physical, cognitive and medical challenges. Bo is 22 years old and has been at Matheny for four years. According to her father, “she has thrived, as the staff at Matheny has provided a level of care and opportunity we never could have imagined. Most look at Bo and see what she can’t do. Matheny turned that view on its head and looks at her for what she can do.”

A recent decision by a Superior Court judge in Somerset County, NJ, has upheld a 2011 decision by the Peapack-Gladstone, NJ, Land Use Board to reject a proposed expansion and renovation by Matheny. That rejection was based primarily on complaints by neighbors that increased traffic caused by the expansion would make Highland Avenue, the road leading up to Matheny, more unsafe and would imperil the lives of those using it.

While those decisions were disappointing to the Geraghtys, Mike Geraghty prefers to “shine a light on those who make Matheny the success it is, rather than focusing on those responsible for blocking the expansion.” He does acknowledge, though, that his daughter may have been accountable for some of the traffic on Highland Avenue because, “the Matheny staff has taken her camping, ice skating, bowling, horseback riding, fishing and to the beach. And this past year, she finished an assisted 25-meter walk at the Somerset County Special Olympics.”

He also has a message for the neighbors who opposed Matheny’s expansion and renovation. “You can attend church every day for the rest of your life,” he says, “but if you really want to see God’s work being done, then take a ride to the top of Highland Avenue.”

This entry was posted in Uncategorized and tagged Bo Geraghty, Geraghty, Highland Avenue. Bookmark the permalink.