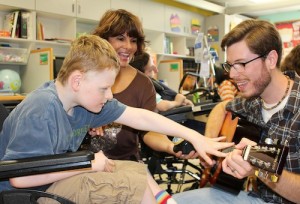 Paul West has filled several roles at Matheny and done them all well. As a teaching assistant in the Matheny School, he was named Paraprofessional of the Year. He has also worked as a recreation therapy assistant and a one-on-one aide. Now, he’ll be doing what he loves most. He has been named the school’s new music teacher.

West has a Master of Fine Arts degree from the California Institute of Arts in Los Angeles and an undergraduate degree in music theory/composition from Montclair State University in Montclair, NJ. He was also part of a quartet that was nominated for a Grammy Award earlier this year in the “Best Classical Compendium” category for a recording of the music of esoteric composer Harry Partch.

As music teacher at Matheny, West is looking forward to enhancing the music experiences of the students. “Teaching at Matheny,” he says, “is no different than composing music. One needs to break down specific subject matters, analyze their most basic elements and reassemble the information in a relatable way.”

This entry was posted in Uncategorized and tagged music, Paul West. Bookmark the permalink.