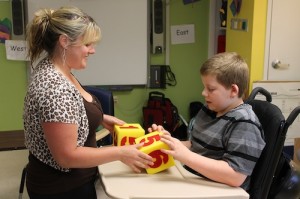 When he was around 2½ years old, Jacob Rolaf showed signs of bruising and was diagnosed with mild hemophilia. About 4½ years later, he began to experience gastrointestinal bleeding and, as a result, needed to be treated with high doses of blood coagulation factors. A resulting infection caused him to develop septic shock and multi-organ failure. “Before that,” says Lisa Cohen, a social worker at Rutgers Robert Wood Johnson Medical School Hemophilia Center in New Brunswick, N.J., “he was an average kid. But he developed sepsis, multi-organ failure, central nervous system injury and seizure disorder. That really started all of his multiple medical issues.”

From that point on, Jacob was in and out of the hospital. At home in Toms River, N.J., he had special accommodations and lots of nursing support. Then his mother became ill and was unable to care for him physically. He was  placed in an institution that provided transitional care to infants and children with specialized medical needs. “His hemophilia had stabilized,” Cohen says, “but we needed to find a long-term placement that had the therapies he needed and so he would not just sit all day.”

In December 2012, a representative of the state office of Child Protection and Permanency (formerly the Division of Youth and Family Services) contacted Matheny regarding permanent placement for Jacob. He eventually was admitted as a resident in May 2013. “He really needed a place like Matheny,” Cohen says. “Seeing him there is wonderful. You can see it on his face. You can see the difference.”

This entry was posted in Uncategorized and tagged Jacob Rolaf. Bookmark the permalink.