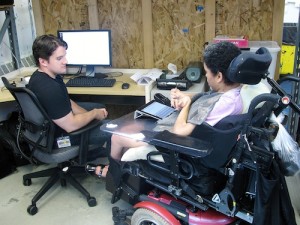 During the summer between his junior and senior year at Gill St. Bernard’s School in Gladstone, NJ, Mike Christie spotted an online ad about volunteering in the drama segment of Matheny’s Arts Access Program. “I was doing acting in high school,” he recalls, “and I thought this would be a new opportunity.” Looking back on the experience, he says, “It gave me a greater understanding and appreciation of how art can affect people.” Arts Access gives people with disabilities the freedom to create in the visual, leterary and performing arts.

Christie, who lives in Tewksbury, NJ, appeared in a GSB production of The Secret Garden that won the Paper Mill Playhouse’s “Rising Star” award for best New Jersey high school musical production in 2008. He went on to earn his BFA in dramaturgy and MA in arts management at Carnegie Mellon University in Pittsburgh. He was looking for employment opportunities at theatrical organizations and other nonprofits when he received a phone call from Eileen Murray, director of Arts Access, and Burt Brooks, performing arts coordinator. After volunteering in Arts Access, Christie was hooked. So, when Murray and Brooks asked if he would be interested in facilitating drama, it was a natural fit.

“Mike was a dedicated volunteer,” says Brooks, “and now he’s a dedicated employee. He has developed strong one-on-one relationships with our clients, and they are all glad to see him and happy to work with him.”

Many of the adults for whom Christie facilitates are nonverbal. Some use augmentative communications devices, but many only have a ‘yes’ or ‘no’ method of answering questions. In working with them to create either a play or a story that can be turned into a play, Christie has to offer as many options as possible. “I ask a lot of questions,” he says, “to eliminate possibilities in order to get exactly what they want. As they’re telling me what they want, I’m typing it into script format.”

On November 2, Arts Access will celebrate its 20th anniversary at Full Circle 2013: Reflections, an event that will include a visual arts exhibit and a multi-media fine arts showcase featuring dance, drama, poetry and prose. Two plays, “Princess Amanda 2” by Luis Rodriguez and “Brother Play” by Missy Cutler, were facilitated by Christie who says he just wants to “make sure people here have the right to express themselves. Art shouldn’t exist just for able-bodied artists.”