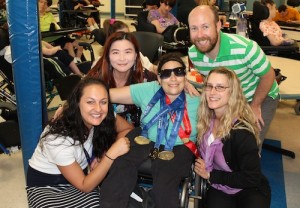 Congratulations to Matheny adult resident Shaleena Tomassini, who won gold medals in the 400-meter and 200-meter wheelchair races at the USA Special Olympic Games held in Princeton, NJ! Tomassini, the first Matheny athlete to qualify for the national games, also won a silver medal in the shot put and 4th place in the 100-meter race.

“It really hit me during the opening ceremony that I had made the team,” she told her fellow residents and staff members at Matheny. “I started to cry. I knew that as long as I tried my hardest, that’s all that mattered. Now I want to go to the World Games.” The next Special Olympics World Summer Games will be held in July 2015 in Los Angeles.

Participation in Special Olympics is an important part of Matheny’s recreation therapy program, which provides a range of recreation choices to improve physical, emotional, cognitive and social well-being. Students, patients and community residents are encouraged to partake in several adaptive sports teams throughout the year, including track and field, adaptive karate and power wheelchair soccer.

This entry was posted in Uncategorized and tagged Shaleena Tomassini, SPecial Olympics. Bookmark the permalink.